A student emailed me and asked about how to handle the spine for overlap & such. He was seeing so many fellow animators using the 'offset keys' approach in their efforts to try and get drag and overlap in their movements, but he felt it created more problems than it solved. I have to agree with him.

For the un-itiated, 'offset keys' is a technical approach in CG to try and achieve an organic solution of weight. The basic idea of the offset-keys approach is as follows: The character moves from frame 1 to frame 10, frame 10 being the pose you want to move into.

The offset-keys technique in theory is very logical. The idea is that if the hips hit at frame 10, then if the mid-spine hits at 11, the up-spine hits at 12 and the head hits at 13 then you'll get good overlap.

Like I said, logical in theory. But weak in practice. At best - when the technique works perfectly- all you get is some overlap at the end of the move, but you get absolutely no drag in the middle of the move. Drag during the move is where the weight comes from. Simply overlapping parts at the end of the move is not enough- it's a cheap trick that doesn't solve the problem. And the technique rarely works perfectly. Due to the way each object in CG works mathematically you end up with all kinds of unintended consequences when you use the offset method. The most common result is a funky hitch in the motion due to the way the math mixes at a given frame for the combination of controllers. (compare this non-offset animation to this one that uses offset keys. Note the junky bits of motion.) These unintended consequences make cleaning up the move much harder and often leads to the animator setting a ton of extra keys all over, tweaking a bunch of f-curves, making dozens of playBlast previews all in the effort to get rid of the hitches in the motion. The animator's energy is spent on removing motion problems introduced by the offset-keys trick, not on building good animation.

The key to good weight in a move is to get a sense of drag during the move. This is done not by some math trick but by making the changing shapes work as the character moves. When combined with some overlap at the end of the move things look much better and are a lot easier to clean up. If there's one thing CG animators need to do it is to start thinking about changing shapes in motion and to stop thinking in terms of moving parts. Moving parts are technical. Changing shapes are organic. All animation - regardless of media - is a 2d image on a screen. CG animators just use a puppet to create those visual shapes on a 2d plane. The visual impression of shapes changing in 2d hand-drawn animation will work in CG. We need to shift our thinking to how to make those shapes work for us. The key comes back again to making good breakdowns. Breakdowns are the secret to the shapes, the secret to getting clean motion with weight. 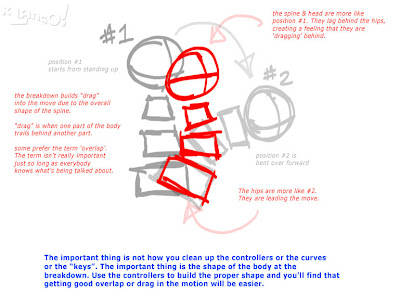 What's really ironic is that many, many 2d hand drawn animators forget this when they get on a computer (I have my theories as to why). The result is the same weightless movement we associate with CG.
Really the problem is all in our heads.

UPDATE: Commenter Jim notes that offsetting keys is very useful in the polishing stage of a shot. I agree. At the final polish stage I offset keys quite a bit, sometimes on a per channel basis. Key offsetting is a perfectly valid technique as a tool for polishing the motion because at that point it's all fine detail modification. However key offsets are unsuited as a technique for building the fundamental motion to begin with.
Posted by Keith Lango at 12:41 PM

:) thanks for posting this, I think many people out there can benefit from it .. thanks for the mail conversation .. now let's learn how to make good breakdowns :)

Thanks. Nicely said and great to hear your thoughts on the matter- I hear lots of spots talking about overlap like it's a cut and dry formula that can be painlessly conjured up with a few key slides. Thanks for the insights

I apologise beforehand for going a bit offtopic with the following enquiry...

There has always been something about your teachings that has been stuck with me for years, and you mention it once again in this post:
"All animation - regardless of media - is a 2d image on a screen."

I totally love this statement, and always bear it in mind when animating. However, sometimes I find it kind of difficult at my current job cause I'm working on stereoscopic 3d...I was wondering, what are your views in stereoscopic 3d? Do you still regard it as 2d? or do composition and staging issues take place? It would be very interesting to know what your opinion is on the subject matter and if you've had previous experience with it. Also, does it limit/enhance storytelling?

Thank you very much, great post...again sorry for going off topic here.

Building overlap into my poses and breakdowns helps immensely, but in the final polish stages I end up offsetting keys all over the place -- whatever's necessary to get the exact motion I want. The polish level of today's feature style requires so much subtlety and I'm just not good or experienced enough to nail the overlap more than 60-70% in blocking.

But it definitely gets me pretty far, and I really like your statement about thinking of poses as SHAPES and not made up of individual parts.

Jim- you're definitely correct. Once I get to polish stage I offset keys quite a bit, sometimes on a per channel basis. Key offsetting is a perfectly valid technique as a tool for polishing the motion. Where it falls down is when you try to use it to build the fundamental motion to begin with.

I'll make a note of that in the post via an update.

That's why it's a good idea to always think of KeyFRAMES rather than Keys in the computer sense. KL's breakdown is simply a frame with the offshoot/overlap/inertia already built into the pose.

This is a good post, Keith.
Back slaps all round!

Ravi-
I think stereoscopic 3d is an interesting technique which can help tell a story. However I don't think the current usage of it is very audience friendly. The constant change of depth from shot to shot makes it hard to adjust and follow. I think if one is going to make a stereo 3d film then that needs to inform how the film is edited. The pacing needs to be a little slower to let the audience's eyes keep up more. For those times in a film where a quicker narrative and edited pace is needed, then the 3d affect should be toned down a bit or the depth should be more harmonious from shot to shot and the changes in depth should ramp up or down over a few shots.

As for how 3d film projection affects the idea of animation as a 2d medium, I don't think it changes things that much. Some depth is added, but not enough to override the basic principles of 2d shapes in transition. I saw the Scrat trailer for Ice Age 3 in 3d in front of Coraline. A good deal of his motion works very well on a 2d shape basis. There was nothing in the 3d projection process that would allow the animation to be considered as better if those 2d principles were not applied. The 3d strikes me more as a rendering/shading enhancement than anything else.

I totally agree, Keith. This was one of the most helpful lessons I learned from Bryan starting out.

I find that I can get really far in my blocking very quickly, because I'm not trying to puzzle through computery corner-cutting all the time. "but if I offset this, then slide this back, then slide this over, playblast a few dozen times, maybe I'll see something I like..."

We're animators, right? And we enjoy making poses, right? Then let's get out there and key everything!!!

::runs off into the wild, screaming and tapping his click-finger faster than you can say RSI::

Not to mention that when you have to meet your quotas at some faster going productions (read TV series and such) offsetting keys all over the place makes your scene unorganized and very hard to change.
Personally I just don't do that, I consider it very bad practice and avoid it till the very last phase for very subtle flourishes.

As an animation student, this post really hit the nail on the head for me. Thank you.

Quick question, would you cheat your pose to the camera if the end result was better clarity and more appealing 'changes of shape in motion'?

Paul- absolutely! If you're not doing that then you need to start. :)

Thanks for this post. I was playing with the whole offset keys thing one day and found the same to be true. You have to compensate for the overlap by having stronger poses and changing shapes. offset just messes things up for me.