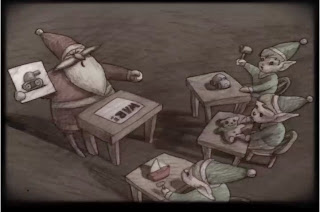 A hat tip to Tim Hodge on sending me this nifty write up on a recent Bill Plympton master class in Toronto. He found it on Nancy Beiman's groovy blog. If you don't know who Bill Plympton is, then you need to go find out at his Plymptoons site. This guy is the ultimate indy animator. He has his own style, he is prolific and he makes a decent living doing what he loves. Friends, you just can't beat that with a stick.
An excerpt from Nancy's post...

This guy is a short film making machine. By his own account he gets up at 6am, and draws until 6pm. He cranks out about 100 drawings a day to get his films made. He makes a feature film every three years pretty much by himself. (note to self: never accept what somebody else defines as 'impossible'). I found it fascinating that he doesn't throw drawings out, but that he just keeps working them until they're better. All the smudges and erasure marks add life. While Plympton's subject matter isn't for every taste, and some find his style a bit rough around the edges (which I think makes it great) you just gotta admire his ability to get the stuff done and dictate his animation on his own terms.
Posted by Keith Lango at 3:26 PM

Very Inspiring and Motivating, Just because others dont want to try to reach that goal sometimes, they do have to shoot others down to make themselves feel better of not even trying. Thanks for the enforcement Keith, I've been an unstoppable force for a while now, craving challenge, climbing Blocks here and there, But learning the 6 to 6 this man does. Makes me even want to work harder now, and have more Rocket fuel in the tank.
The end result of the project is so fulfilling.