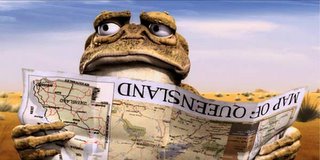 Cane Toad is a funny short film that's been out a few years now. Normally in this world of fast paced love 'em and leave 'em animation that means it's old hat, boring, yesterday's news. But I like to bring these things back out of the storage bin now and again because a fun animated film is still fun to watch years beyond it's original release. That and being a short film maker myself, I like to promote folks who get a short done and done fairly well.
The impetus for this Cane Toad redux on my part is that recently on the Cg-Char forums Andrew Silke has done all of you first time animated short film makers out there a HUGE favor. He's posted the various storyboard animatic, layout and edit locked pre-final versions of his and Dave's award winning short film Cane Toad. Many of you may have already seen this little humorous gem of a film, but if you haven't then take some moments in your day to head on over and have a look. It's a pretty valuable look at how they went about making their film and it's a mighty generous thing to do. It's nice to see how organized they were in making it, recording a production diary and all. Me, it's all I can do to find a few hours a week just to tinker with my short, much less document it. If I had to document it as well I'd never get anything done. Not that I'm getting much done without taking the time to document it. But anyhow, go enjoy Cane Toad, enjoy the behind the scenes in progress stuff and enjoy Andrew's production log. Good stuff worthy of a mention here to bring the film back into the light for a little bit.

After creating the layout, do you create a new scene and use the timing from the layout as you do your animation? Or do you work on and refine the animation that is in the layout?

thanks for posting this, keith! I worked with dave a bit on LOTR, and he's one incredibly nice and talented animator.

a true star in the industry!