Check out a clip from Shane Acker's animated film "9". 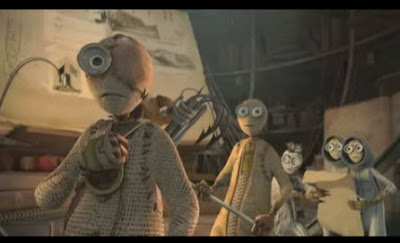 Click to see the clip.
This looks interesting. From a visual construction standpoint the characters could stand out from each other and the environment a little better at times. A small color adjustment in their design would accomplish that. The animation works because the style of the world is visually detailed, but subjectively fantastical. This gives the animation some room to breathe- it doesn't have to be as tight or as highly polished as something that looks more 'normal' or recognizably real-ish. This was a very wise choice for a lower budget film because that other high polish style of CG animation is very expensive. The visual world and the motion work well together in a more interpretive and fantastical way. Never under-estimate the power of visual and motion harmony. Story-wise this isn't your typical fluffy talking animal movie. Which is a good thing. It remains to be seen how that fact will impact it in the box office. If it can make Coraline or Despereaux kind of money then I think it's a success and will mark the continuing expansion of what commercially viable CG animated films can be.
Posted by Keith Lango at 11:48 AM

I can't wait to see this movie! The short was awesome and besides being a cool idea that's a little more out of the mainstream, the story behind it is pretty much the pipe-dream for every indie animator out there.

Looks pretty cool! I suspect it will be an interesting film with a moderately good story and decent visuals. I doubt that it will do as well as Coraline without the built-in Neil Gaiman fanbase, but I hope it does well. It would be nice to see an animator rewarded for their ambition, especially when the product is not unwatchable.

"From a visual construction standpoint the characters could stand out from each other and the environment a little better at times...""[The style] gives the animation some room to breathe- it doesn't have to be as tight or as highly polished as something that looks more 'normal' or recognizably real-ish."I agree on both counts, Keith. The second point also ties in nicely with your previous posts on exaggerated naturalism. The design primes the audience's expectations of the movement.

I, too, hope this movie does well. It may not change the world, but I'll be glad to see an animated feature succeed without trying to ape Disney or DW.

"The visual world and the motion work well together in a more interpretive and fantastical way. Never under-estimate the power of visual and motion harmony."

I agree entirely, and I think you just articulated exactly why I personally respond so positively to 9, but had a hard time sharing the same enthusiasm for Sid.

It's not so much the technique being used as it is the fact that the performances and movement seem to come from the characters themselves rather than being forced upon them by an external force (whether mocap performer or animator).

What are some ways you see design and animation working in tandem to create a unique viewing experience other than exaggerated realism?

There's of course the Tex Avery type of zany over the top stylization. But what about ways of being equally stylized in more subdued ways? Aardman's "The Pierce Sisters" and some of the work done by studio AKA come to mind. What do you see as some of the potential opportunities for hand keyed animation in the future?

@Eliot:
I really have a strong affinity for the work coming out of Aardman and Studio AKA. Their CG work willingly explores the margins of what can work. Some of their stuff is more successful than others, but I love the fact that they're trying so many different things. I'd personally like to see a kind of UPA minimalism done in CG. Right now the typical approach of CG minimalism is the white-world, like Pocoyo. It works well, but avoiding having a world at all isn't quite the same as finding a way to overcome CG's built in realism in dimension preference. And that's the deal there- finding ways to use CG without letting that inherent bent towards dimensional realism in shading overwhelm things. In my experiments I've found that simply taking textures out isn't enough to push that dimensionality back to where I want it. Toon shaders in CG aren't any better. I've also found mixing in detailed painted backgrounds with CG characters (toon shaded or other wise) doesn't do the trick, either. There's a disconnect, the visual harmony is completely missing. I have started finding some small successes adapting a kind of simplified, iconic background with the characters. Something very loose and abstract like Toot Whistle Pluck & Boom. The goal is to make the background loose and unconstrained so that I have more freedom to make the motion be a different style than the typical high polish CG movement. I want to have fun when I animate. I've found I really like painting the backgrounds, as opposed to building a full world, texturing it, lighting it, rendering it, etc. I'm also looking to do looser cartoon animation without all the tedium of polish. I love pencil roughs, so I want rough CG animation that kinda captures the artist at work like pencil roughs do for 2d. The key to make animation that is still good in its visual context. The AKA Pica Towers stuff really hits that sweet spot. It is great in its context. I really think that this is my ticket to that happy land. I'm just trying to find the right map to get there. :)

Keith, the kind of work you're describing really touches on some aesthetic interests I've been gravitating towards over the past few years.

I share your disdain for toon shaded 3d. For me, the illusion is always broken by the way CG characters move through space in a mathematically perfect, always rigidly on model kind of way. The end result feels more like rotoscoping live action than a lively hand drawn film.

On the other hand, the rendering techniques Aardman used in "The Pierce Sisters", and some of the experiments you were doing with the Secret Joys of Myopia seem much more effective and original for CG. Sort of a mixed media/chalk pastel/guache kind of look that seems to gel better with the movement of the characters. I also noticed both you and Aardman added some animated noise to these textures, and played around with animating your characters on 2's rather than always using 1's.

It seems that the current push for CG rendered films in the exaggerated-realism style are striving for hyper polished smoothness of motion and surface. To distinguish itself as a medium, it seems like hand keyed CG could be used to experiment more with stylized texture, both as a surface material and a more textured style of movement.

(thought I'd left a comment, guess it didn't get saved )

I'm glad to see something a little different coming out of Hollywood, and this project looks cool. I liked 9, and I also liked how 9 worked without dialogue. Something that kind of sticks in my mind like a splinter with this one is that it's so obviously influenced by the works of the Brothers Quay, who arguably perfected the feel of this world. I wonder why Shane Acker didn't just do this in stopmotion? It seems it would be cheaper to create worlds full of broken stuff in real life then to model texture and distress it in CG. And the smooth CG motion just feels jarring when I expect it to have the stopmotion charm. It feels like someone's trying to Disney-fy Street of Crocodiles.

Did you read that interview with the set dressers of Wall-E? (http://www.animationartconservation.com/wall_e_design_with_a_purpose.html) Something that occured to me reading that is that perhaps there is a hint of a way to do a non Exagerated Naturalism CG. You know how John K. is always talking about heirarchy of shapes? Large Basic shapes, then specific details subordinate to the basic shape? Well I was wondering if it would work for the large basic shapes to be of CG,( the tower of garbage), but the all the subordinate detail should just be painted in the texture (the actual garbage). So the scene without textures would just be a bunch of large primitive shapes, cubes and cylinders, but turn textures on and you get the quick illusion of a fully dressed scene.

I hope whoever does throw off the yoke of homogeneous looking CG is a strong enough storyteller to give their new look legs to run with.

Thanks for keeping the ideas percolating Keith :)

The animation looks pretty traditional and tight to me. Good poses, follow through, overlapping action, squash and stretch weight. Don't see any difference in it from a typical big studio animated feature??

RIKYU--
It's the level of polish that's different. The basics are there, but there's a level of refinement that isn't quite up to big Hollywood feature film results. I could do a breakdown on a shot and point out the issues, but that's a lot of effort. :)