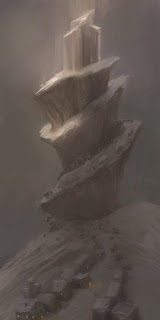 Friend, colleague, artist and animator Mark Behm has a book out called Nightwork. It's a collection of his paintings and such- all of which make me sick with envy and admiration.
Mark is also interviewed on the StrutYourReel website. In the interview he touches on a lot of topics, several of them directly about animation, even touching on photo or video reference and his preference to avoid using it. Having worked with him a few times over the years I know that Mark rarely ever used video reference of himself as the basis for his animation. The result is a kind of signature approach to his work. There are times I can pick out Mark's work from the films he's worked on. There's just a certain kind of "Behm-ness" to them that I recognize, not unlike being able to pick out the work of a 2d animator. I think that's a good thing- being able to see the artist coming through. It's such a hard thing to have happen in CG.
Posted by Keith Lango at 11:25 AM

aw, shucks, Lango. Thanks for the plug!