What an elephant can teach you about your career in animation 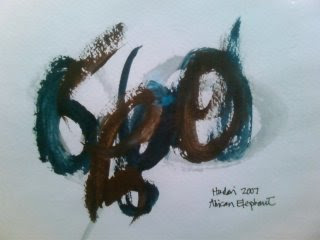 This is a painting made by an elephant. Yes, that kind of elephant. The elephants at the Nashville Zoo  paint to help pass the time. Apparently it keeps them happy. I thumbed through a selection of original pieces at the zoo's gift shop and I was really taken aback at how cool some of the pieces were. I should have taken pictures.

But if that weren't cool enough, apparently they have elephants in Thailand that also paint- and several of them are quite accomplished. Check out this painting. 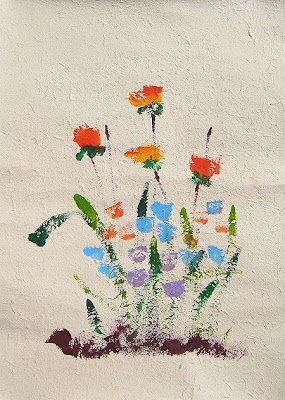 It's done by an elephant named SriSiam. You can check out a gallery of paintings by several different elephants here. Here's a video clip of the animals at work that is actually pretty cool...

And in case you think it's all rigged, nope.

So why am I going on about this? If you read up on how they paint it's pretty clear that they are following through on a good deal of training. It does seem like they enjoy it, though. But a quick look through the gallery linked above shows that different elephants made the same kind of paintings with the same tone and motive appear over and over. A pattern emerges and we can see the trainer's hand at work. The animals were given certain 'principles' of how to achieve a given subject and then through positive reinforcement learned to repeat the results. Sweeping lines for an elephant, vertical green lines and orange pokes for flowers, etc. I still think it's really cool (my cat can't do this), but I just can't make the jump to say that the elephants are expressing something artistic in themselves. Maybe they are, but it seems to me to be the product of a lot of training to make paintings for people to buy and like.

But how is that much different than us and our 'principles' and 'rules'? Modern western animators might not be that far removed from approaching their work like these trained elephants. The hegemony of the classic 'west coast film style' of animation (Disney in 2d, Pixar in CG, et al.) can be suffocating in it's near soviet insistence on conformity. We need to guard against letting our definition of what makes 'good' animation grow smaller and smaller. Watch a film like John Canemaker's "The Moon and the Son" and you'll see a fantastic example of expressive animation that is nothing at all like the dominant west coast film style. That style is good and has a place, but to me it's not terribly personal. It sells DVD's, though, and so we learn it (and in my case, teach it) to make a living. But I like stuff that possesses a personal voice for expression that is not leather bound by the strict adherence to a list of rules and principles. And more than any other medium CG suffers from a built in level of conformity that crushes independent style. Overcoming that oppression in CG takes far more effort than any other form of animation, in my opinion. Marc Craste is an example of a CG animator who has crafted his own style- one that doesn't thumb its nose at principles, but at the same time isn't stifled or bound by them. It would be good if more of us would find a way to rise above the overtly produced results that aren't that much more expressive than what a trained elephant can accomplish - yours truly included.
Posted by Keith Lango at 10:55 AM

hey keith! thanks a lot for reminding that boundaries can sometimes be resulting in repetitive products. something to keep in mind!

You're right Keith! It's what I thought when I saw the trailers before Wall-E for the load of animated features coming out soon. They all look they same, especially the human rigs. All the "whacky" animation is the same too. For crying out loud, even the gags are the same. Maybe what we could use is a bit more of the French animation style.

Using the French animation style (which is delightful in works like "Le building") would still amount to using someone else's style. I think what Keith's getting at here is to define one's own style. It's a noble goal, but a life-long one.

Keith, you're right about CG suffering this more than any other medium, and the biggest reason is the production pipeline. It takes a few minutes to scribble a wildly original character in a sketchbook (once you have the idea), and maybe a few hours to draw a quirky walk cycle using that character. But if you want to do the same in CG, not only do you have a mountain of pre-production between you and the animation, but once you get there, you've committed to the mesh and the controls you've built, which are a million times less flexible than a line on paper or a blob of plasticine. And then you meet the f-curves. 'nuff said.

Artistic breakthroughs in CG come slowly, because they take more than just creativity... they take a large amount of planning, preparation and persistence through all the stages of the pipeline.

careful consideration keith...i agree with you!
i live and work in italy and what i'd like to add to your idea is that europe is following almost the same steps in the feature film production.
no ones care about filtering ideas and trying to purpose new styles...i guess just belleville rendez-vou and persepolis and nocturna by filmax have been three examples of what animation can also be like.but since you were talkin' about CG i guess the general tendency to keep usa style in europe can be a big risk...what we must care about is that in europe no one can plan an high budget production...so it's fool to continue running after the way you make movies to be sure that this will induce european people to watch european movies!that's absurd imho!we have a lot of people workin in short movies and a very old school concerning indipendent cinema.why it's so hard to ask this people to bring some freshness on the screen avoiding this stupid competition with majors?

Just incredible! Thanks for sharing this

Thanks! I love articles that provokes thought. And this really inspired me to go home, and do some animation!

I agree completely about the "formatting" of style in animation.

As you´ve said, it´s sufocation of the individual styles and expression of each animator in favor of industry-scale productions and teams.

For a large house, I guess it´s hard to escape from this (from trying to "level up" all animators together), but it´s strange to see a single style of thing ruling an art form.

Explendid article this you wrote.

Ah, if you have a time, Keith, please take a look at my blog: athossampaio.blogspot.com.
I´m a fan of your blog and your great sharing of tips and articles about animation. I´ve learned a lot from your tutorials when I was beginning (and still learn).