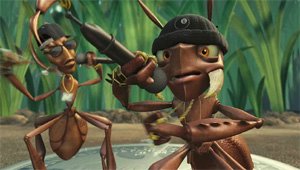 This is a bit of old news, but for those who want to see a high res HD version of The Ant Bully teaser/trailer, you can check it out on Apple's Quicktime website. Apparently Warner Bros recently had a test screening of the work in progress film and it scored very high with the test audiences.

And for what it's worth I took my shot from the trailer (the rapping ants scene depicted above) and put it up in the Animation section of my site. That's right, Chubby White Boy animated hip hop rapping ants. I've got street cred now, yo.

Today in the town of David....

A Savior has been born unto you... 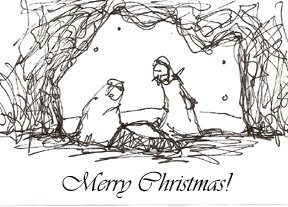 My good buddy Tim Hodge has posted an essay of his on his blog looking at the challenges and changes in animation from a 2d/3d lense. Go check it out. It's well written, thoughtful and a very fun read if not a tad crumudgeonly. Kinda like Tim. Only not as ugly. He's also got a fun sort story on the blog and some sketches, too. A real rennaissance man. Check it out.
Posted by Keith Lango at 9:08 AM 9 comments: 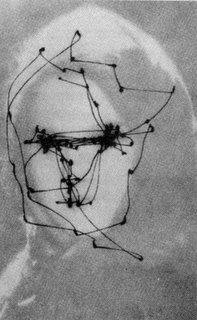 Here's an interesting link I've had around for a while. It details the nature of how our eyes move. Follow some of the other research links from that page if you're really interested in geeking out about this stuff.
Most of us know that one of the best ways to keep a character alive and thinking is subtle eye shifts. As with anything try not to over do it or else things can look a bit spastic and fake. But when done well and well placed there's a lot of power in using well timed shifting of the eyes. The shift could be motivated by the internal thoughts or feelings of the character while they are presented with a moment of quietness or thought. There the relative pace of the shfts gives indication to the speed of the unfolding of thoughts in the head or the emotional energy of the moment. If the darts are fast paced and come quickly one after the other it can indicate a great flurry of thought or a rapid firing of emotional energy. Slower pace indicates a more methodical, more pondering state of mind. This kind of eye darting is pretty common in animation these days.
Another motivator for eye darts (which I don't see as much of) could be the character's examining the face of another character they're talking to. We do this ALL the time. That's where the saccades come from, the constant exploration of our world around us to take the information in. It's a but harder to do because managing eyelines in animation is such a difficult thing to get right in the first place. Eyelines are so very fragile. If you're off just a little bit suddenly your character doesn't seem to be connected to their moment. So once you get a solid eyeline working sometimes we're a bit afraid to mess with it. But we don't just lock eyes with any one thing for very long. We'll examine, we'll move around, scanning, processing. When listening to another person we'll be drawn to their eyes first -individually- then to the mouth. We'll roll over this heirarchy for a bit as we piece together the other person's demeanor. That's how we read the intentions of those around us. Then our attention will turn to areas of high contrast. First in motion, second in brightness value, third in color. It's definitely hard to pull off well without ruining the eyeline of your character, but when you can get it working it adds so much life to the character as they listen or speak to another character.
I like to keep eye shifts quick. Usually 2 frames with a favor on the inbetween toward the end. A motion curve for a typical eye shift for me would have this kind of a pattern... 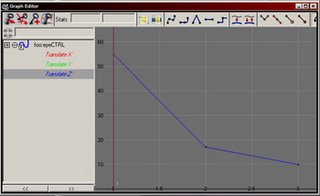 And always remember that when the eyeball moves it affects the fleshy bits around the eyes. The lids mostly, but also beyond the immediate lids in a very limited and subtle way. if your rig doesn't move that sutf automatically it'll be up to you to get it working.
Anyhow... hope that is useful to some folks out there.
Posted by Keith Lango at 2:04 PM 11 comments: 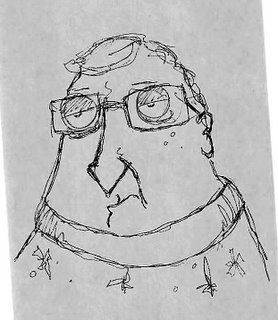 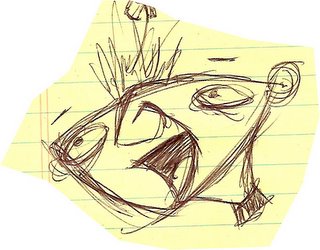 This was a little experiment with shapes that turned out better than I expected. It's rough, but I kinda like it for some reason. My little boy thought Puhsty would be a good name for him. I guess that's as good as any other name. Except Sherman. That's a better name than Puhsty, I think.
Posted by Keith Lango at 8:24 PM 3 comments: