Found this via the Lines & Colors blog. This is a real person in a room... 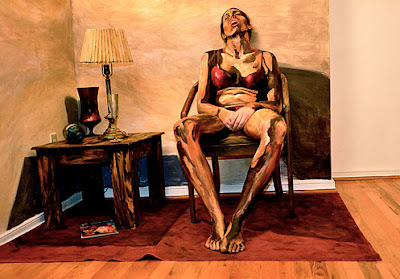 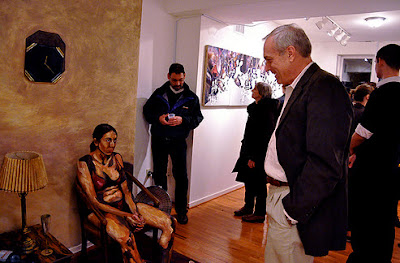 This is part of an exhibit done by artist Alexa Meade. Be sure to see her Flickr photoset of this exhibit.

Here's a similar approach by a different artist, Peter Kun Fray. (found via the David's Really Interesting Pages blog- a good blog if you're into NPR rendering. And dinosaurs. Heh)... 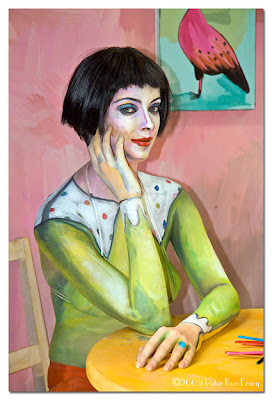 Kinda blows my mind, really- and it certainly opens the door to thinking more about what is possible in CG as a medium, too.
Posted by Keith Lango at 6:21 PM 7 comments:

Animator/director Nick Cross (The Waif of Persephone, Yellow Cake) outlines his animation process, with lots of little video clips showing things as they progress. He's animating a new film called The Pig Farmer. A great, great blog post- especially for you guys who've never animated in 2d before. Those previous students of mine who adhere to the more 2d-centric way of animating in CG will find a lot of very familiar thinking and approaches.
Be sure to check out his other posts, he has one on his inking process in Flash, too.
Posted by Keith Lango at 6:05 PM 1 comment:

Another good, fun read. Unfortunately in today's media conglomerate system this approach to animation isn't really applicable. But as things slide forward and we see more and more opportunities for individual directors or small, nimble teams I think we'll see a resurgence in this kind of animation approach. And when that time comes these ideas espoused by Mr. K. will come into play more and more.
Posted by Keith Lango at 5:54 PM No comments:

The Impending Death of Complexity?

Very interesting read from Clay Shirky. He explores how the systemic complexity in how current visual media is made may end up being a huge roadblock that will prevent old-guard media systems from adapting to new formats and audiences. For additional commentary, read the TechDirt summary, too.

The take away for us animators? Our pre-conceived idea about what constitutes "good animation" may need to seriously shift if we want to be nimble enough to find a niche for ourselves in the coming media landscape. As horrible and unfathomable as it sounds, "good" animation production values are not a pre-requisite for successfully finding an audience. Being entertaining and appealing are. All that said, if you can still afford to make "good" animation, then I think you owe it to yourself (and your audience) to try and do so.

UPDATE:  Mark Mayerson just posted some thoughts on the same article. His insightful analysis is always a favorite of mine to read. Check it out, too.
Posted by Keith Lango at 5:20 PM 1 comment:

Who knows how this will go over?

This could hit a nerve and really find an audience, or it could fall flat on its face. Right now I have no idea which will happen. There's some fun stuff here, and of course some cliche' cheese, some typical snark. Visually it looks pretty solid. It's not tough on the eyes like Space Chimps or Valiant. Some nice animation, good modeling, solid lighting, fun designs. What we're finding is that by now nearly everybody knows how to make a CG animated film look pretty good. No longer there this huge drop off in visual quality one you get past the big 4 (Pixar, DW, Blue Sky, Sony). That playing field has leveled off quite a bit. Is this enough to make Despicable Me stand out and make some money? I have no idea. Interesting times.
Posted by Keith Lango at 4:51 PM 4 comments:

I'll be doing a number of posts rapid fire today- catching up on stuff I saw while on vacation. First up.. Sonar by Renaud Hallée. Just so clever and cool.

Posted by Keith Lango at 4:24 PM No comments: