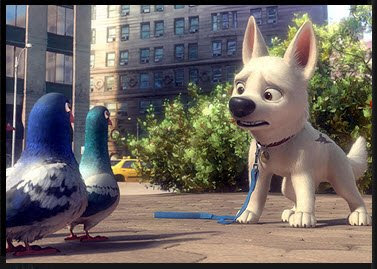 "Hmm. Tastes like chicken." We always say that when something doesn't have a distinct flavor, don't we?

When I lived in the Chicago area some years ago we bought our first home in one of those 'corn field' subdivisions. If you've spent much time in the US you know the type- cookie cutter houses on streets named Raleigh Trail, Snowbird Trace and Chadwicke Court. Homes that were planned and picked out of a catalog, cropping up in vast fields that used to grow corn before houses.

It was a good first home, we were thankful for it. But even then we knew there were problems with the idea. It was very far out, the neighborhoods were growing faster than weeds and we wondered at the breakneck pace of it all. Soon the entire area filled in with three huge shopping centers, a Walmart, Target and a Costco, four humongous supermarkets, 5 complete sub-divisions containing 700 homes each and two huge movie theaters. It went from sleepy farm roads cutting through endless cornfields to a full blown 21st century American suburb in just 3 years. Back then I had my doubts about the sustainability of that trend. Turns out we're seeing the fallout now in ye olde real estate bust (a bust that we happily avoided by selling into the rising market, not the falling one. Not that I was smart or anything- just blessed. Even a blind squirrel finds a nut now and then). Ultimately every Builder Bob with a hammer went into business building and selling cookie-cutter homes. It was like printing money- and for a while it worked. The end result? Lots of houses, all with the same feel, made with homogenized factory monotony with little or no charm or character. The houses, while fine homes and certainly quite comfortable and liveable, were utterly unremarkable with their smooth vinyl siding nestled amid a sea of meandering cul-de-sacs and lanes with no trees. Once while we lived in this stamped out subdivision an older fellow in his early 60's got lost going for a walk in his own neighborhood one cloudy afternoon. When asked how he got lost he replied "Everything's the same!". There were no unique landmarks, no memorable places to turn or recall. Everything blurred into a beige haze of vinyl.

What's this got to do with Bolt? Seems it's not exactly been a gang buster in ye olde box office on its opening weekend. $26million is all. While that's not a disaster, it's no doubt well below what the Mouse House was gunning for with this film. It was their first film made "from the ground up" at Disney under the creative guidance of their newly installed Pixar leadership. There were no compromises with the old Eisner Disney in the creative direction of Bolt like there were in Meet the Robinsons (which opened with similarly yawn inducing $24million). Nope, this film was done completely the Lasseter way and I'm sure the expectation was that they'd get Pixar's blockbuster results. Something odd happened on the way to the theaters- the audience forgot to come. Like those comfortable & liveable tract houses, Bolt was a comfortable, decently crafted film that was for all intents and purposes utterly indistinguishable from the littany of other comfortable, decently crafted CG animated films that have come before it. The landmarks have been erased and the audience got lost in the sea of "Everything's the same".

Cycles run their course. All of them. How close are we to CG's Hercules?
Posted by Keith Lango at 7:39 PM 25 comments:

Kinda neat stuff. The actual tool use in the window looks nice and simple- but the steps needed to get there seem klunky. That's my beef with Blender- I find its interface and usability to be problematic. At least for me it is. Still, this is a great feature. Blender is developing nicely- and it's free. Pretty cool.


AniSculpt test_01 (ball and character) from psl on Vimeo.

Getting back up on the horse. Ahem.

Anyhow, following up on that last (embarrassing) post, here are some sequential drawings to check out for a few movements in the Sylvester clip. The first one is kinda neat- his tongue is completely in and then the next drawing is completely out- and not just out, but down to his belly out! Check it... 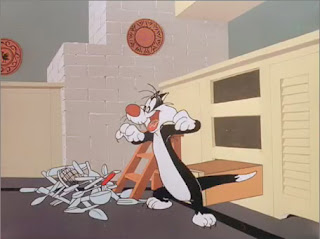 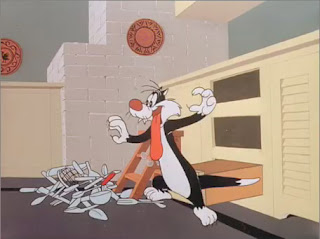 Each of these drawings were held for 2 frames. I think the reason you can get away with this is that the rest of the body isn't changing quite so drastically. It's changing, but the general silhouette is basically the same.

Now we get to the happy feet stamping. Again, back to back drawings held on 2's. First, the right foot is down and the left foot is up. 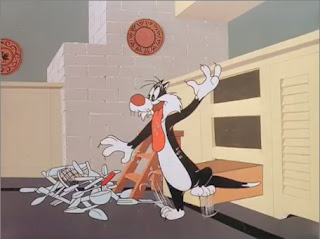 Next, the right foot is up and the left foot is down. 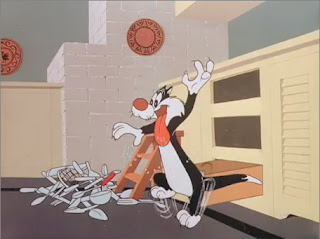 No breakdown or inbetweens. Just extremes. I've tried this in Cg and it's really hard to make it look as good as it does here. One thing I learned is to not cycle between two leg position/shapes that are exactly the same, but to keep it varied as the legs hammer back and forth like that. The dry brush is the real key, though. That's what I think, at least. But what do I know? I do know that motion blur doesn't work as a dry-brush replacement.

And now for giggles, we can check out how he switches from the foot stamping happiness to the scramble run off screen... 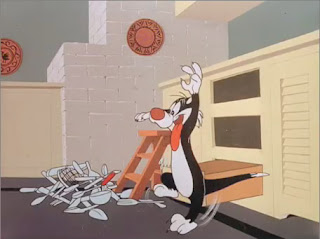 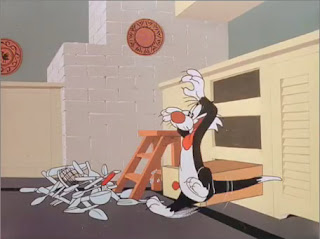 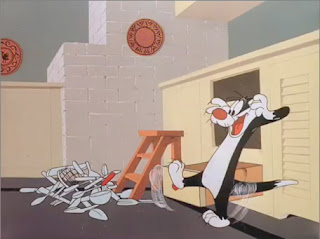 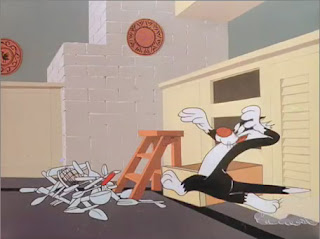 That's crazy stuff. Those 4 drawings are back-to-back-to-back-to-back in the scene, each held for 2 frames.
And this is a 'simple' scene. The stuff with him emptying out the drawers just before this is flat out amazing. Go watch the entire short. "Canned Feud". It's on the Loony Tunes Golden Collection DVD set, first volume, disc 4. The entire short is just jam-packed with gold like this. Who's doing stuff like this these days? Who in CG animation even thinks like this?
Posted by Keith Lango at 11:29 PM 13 comments:

A study in cartoon timing.. UPDATED

Commenter Lampshademan suggested the timing might be a frame rate glitch in the movie file due to the DVD capture. So after trying to find the right combination of software that lets me get accurate frame stepping through a clip from a DVD I was finally able to verify that the scene is basically animated on 2's. All of the drawings, except for the first one of the hold and the last 8 (for the run off screen) are held for two frames each.

Nothing to see here folks. Well, except for a red-faced idiot.

But enjoy the fun animation anyhow. 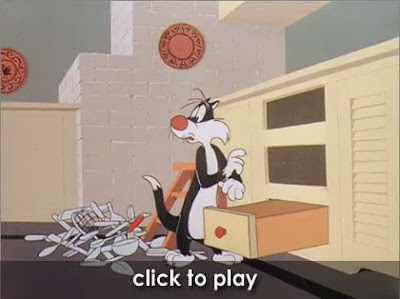 h
And I will talk about the change from one drawing to the next because there's some fun stuff going on.
Posted by Keith Lango at 5:07 PM 11 comments:

My take on the US election.... 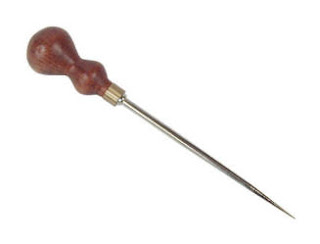 Would you like to be stabbed with a sharp stick in the right eye or the left eye?

That's it. Those are your choices.