Here's a fun little diversion for your Labor Day weekend. I got this note from good friend of the Lango World Domination Headquarters, Tim Hodge...

"Time & Chance" is part of the GTTV Summer Film Competition. It's an online film festival that will be over before you know it.
Out of over 150 entries, "Time & Chance" was one of 6 that is being featured!
Click HERE to see it!
It is a subscription based viewership, so it will cost you about $1.50 to watch the film. (If you don't want to subscribe, you won't hurt my feelings.)
Feel free to forward this to your friends!
Enjoy!
- T

This is Tim's short film that he recently completed. I did some CG work for Tim on the short. My primary role was to texture, rig and animate the flies. Other folks contributed to the animation and did other things, but I can't remember everybody and what they did. I guess that's what the credits are for, huh? So if you contributed to this fine little film be sure to speak up in the comments and get your share of the love.
Check out all the fun on Tim's Time & Chance blog. It's fun for the whole family! And let's not forget to say Congrats to Tim on making the film! It's always a huge achievement to get one done. Now do more!  ;)

How about this for a philosophical question...

Do animated characters "act"? And what about animators? Do we "act"?

Acting, by definition, is when a person pretends to behave like another person in another place at another time. Even if they're pretending to be themselves in a real place we are still stuck with a person pretending to live a moment that does not currently exist. All acting comes down to a falsehood. A false person, a false place or a false moment. One or more of the three. Acting is pretending. Without pretending you don't have acting.

So when I am animating, am I "acting"? Not really. When I animate I am not pretending to be a character in some other moment in some imaginary place. I make no pretense about it- I am Keith, sitting at my desk animating this scene.

As an animator am I pretending to be Bugs Bunny? Aside from the physical difficulties of such a thing, not really. So what is it that I'm doing if I'm not 'acting'? I prefer to think of it as imagining. I am most successful when I can simply imagine the character just being themselves in whatever moment of their lives that I am called upon to animate. The key to this is to know the character. That's it. Insofar as I struggle to express a character believably it shows that I don't really know that character. Want proof? OK, try this....

Think of someone you know very well. Then imagine they are running late for work and have just hit their 5th red light in a row. You can see them, can't you? You can imagine exactly what the look on their face would be, how their hands would be gripping the steering wheel- what they'd do and how they'd behave while they wait for that light to change to green. And you know that what you are 'seeing' in your mind's eye is not what you would do in that moment, but it is what this person you know very well would do. They have unique actions, mannerisms, expressions and gestures that you don't use, but you can "see" them.  At this very moment I can imagine my Dad in the situation I just described and I can see him as clear as day, how he'd act and everything- and he's been dead for 8 years. Today my Dad is no more physically real on this earth than Bugs Bunny- but as a character he's very real and I know him very well.

And this isn't hard at all. Why? Because I've already known how to do this from the time I was a kid. And so do you.

The hard part in this comes when a character hasn't been defined very well for you by the director/writer/story people. You don't have enough to get to 'know' the character. Or worse, we're too lazy to get to know the character. It's at that moment that we fall back on generic gestures or expressions, or we copy ourselves acting just to get some believable motion on the screen. To me that's a poorer solution compared to the power of knowing the character. In animation if we had characters that were more clearly defined and the imagination to see them being themselves, then perhaps we can maybe break free from the generic "everything same" characters we are so prone to make.

* OK, exception would be when Bugs Bunny dresses in drag to fool Elmer Fudd. So in that sense, yes an animated character does "act".
Posted by Keith Lango at 6:42 PM 17 comments:

Messin' around with the 'toons

I've been messing around with various little animation tests done in a very cartoony style. You know, just for kicks. 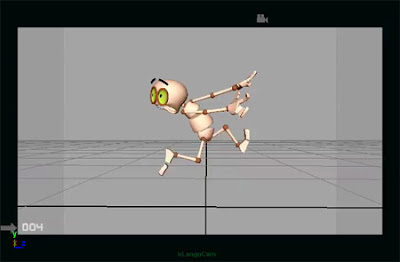 Animated on 2's, for those that are keeping score at home. I probably could have done the leg scrambles on 1's, but I wanted to see how it looked on 2's.
Posted by Keith Lango at 3:39 PM 7 comments:

A question from an APT student....

I just had an email with one of my APT students and I thought that it was an interesting one- so I thought I'd share it with you. It's a super common problem in animation. You think everything is OK in one phase of the scene, and then you move on to the next phase and suddenly the stuff looks like crud! Problems, problems everywhere. It can be discouraging if you let it. So in an effort to kinda "see ahead" and fix things before they get ugly my student asked...


How do I avoid running into the kind of problems that I faced on that scene? I ask because I couldn't see some problems in stepped mode. Is "more breakdowns" the answer? Then again, is it normal to see so much junk once we go to linear mode?

I remember this being perhaps the biggest struggle for so many CG animators- and I mean pros working on films. Everybody has that "Aw geez, this looks like crap!" stage right after blocking. When you watch your finished blocking in stepped mode things look like they have life and are so "right". Then you throw all the tangents to linear or spline and it seems like it all falls apart. Everybody wants to know some secret or trick to avoiding that ugly stage. Such a trick has always eluded us. The reason why is simple- it doesn't exist. Here's what I wrote in reply to the student's question...


I think there's a point where you can see what you see in a scene and you can't see anything more until you move on. Animating scenes is like exploring a wooded territory. You can fly over it with a plane, you can study maps, you can plan and practice- but until you start getting into the woods you don't really know everything that's there. And even when you get 1/3 of the way through the territory you can see ahead, you've learned some things and you can now make a solid plan of progress, but until you go forward you'll never really know what you have on your hands. Scenes are like that sometimes. You do what you can do in blocking and then when you're happy with it- allowing that you've thought it through and have worked it to your satisfaction- you move on. You'll find new things every step of the way. It's not a failing or a problem or a weakness that needs to be fixed. It's just animation. Funny, it's also exactly like life. :)

There will always be problems in a scene no matter what stage you're at- even when it's "done". Just keep moving forward.
Posted by Keith Lango at 8:26 PM 13 comments:

Wither the "inherent appeal" of CG?

Amid Amidi points up a nicely done bit of commercial advertising over on the Cartoon Brew. The animators used CG to emulate the old stop-motion look and palette from days gone by. And the spot is really, really well done. But Amid takes issue with the use of CG as merely a tool of emulation of other visual styles. To quote the man himself...


It’s a well done spot, no question about it, but I have mixed feelings about it. Frankly I’m getting tired of CG directors evoking charm in their work by cashing in on the audience’s fondness for older animation techniques. If you’re using CG, why not explore the inherent appeal in your chosen technique instead of using it to mimic a look from decades ago?

It's a fair question. However the reply comes in the form of yet another question- a simple, yet confounding one.

What is the inherent appeal of CG? Does it even have one?

The comments in response to the Brew post are actually very well thought out, including Amid's own replies. You should take the time to read them. These questions have been something I've kicked around here on this blog in the past. Ultimately I never was able to find a cohesive answer that laid all arguments and questions to rest. One commenter on the Cartoon Brew post has this to offer...


Couldn’t using CG to “mimic a look from decades ago” technically be considered “the inherent appeal in your chosen technique”?

That's probably the best answer yet. It's not too far from the one I came to last year. I see CG more as a tool of collage. It can be just about anything you want it to be. The untapped potential of CG (to me, at least) is that it removes the technical barriers that would otherwise keep diverse styles and techniques from being used together. I'd like to see what can be done with that potential for mixture.
Posted by Keith Lango at 10:34 PM 7 comments: