I've tried several different sculpting/modeling programs. Z-Brush, Mudbox, etc. They all were really clunky for me and I was never able to get them to play nice with my animator brain. No matter how hard I tried I always just made tumors. Something about those programs was just.... I dunno. Not something I could handle.

Then I'd heard about this small, free sculpting tool called Sculptris. The price was right so I figured, what the heck? I'll try it. And wow!-- It is easy and super friendly to use. The interface is extremely slim and unintimidating. The program isn't bogged down with a million different modes or tools. There are maybe 8-10 different hot-keys and two modes- sculpting and painting. And that's pretty much it. I was impressed with how it automatically adds tessellation when the sculpting needs it and you don't even need to think about how that works. It just does it. But it also lets you paint to reduce the topology if the mesh gets to be too dense to deal with. You'd still need to re-topologize the model to get a rig-able/animatable mesh from this, but then you need to do that with the other more expensive tools, too. Here's the first character head I made with Sculptris. I whipped this up in a couple hours today.... 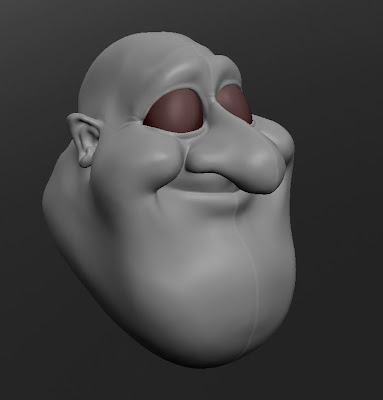 And a screen grab of the entire interface. This is literally it- no other windows, menus or tabs. Simplicity personified.... I had an absolute blast making this. (I wish CG animation was as simple and fun) It's not a great sculpt, but then I harbor no delusions of grandeur regarding my sculpting skills. But for someone who has never been able to make anything more than a lumpy potato in Z-brush or Mudbox, I think this is a bit of a breakthrough. If you've tried the other sculpting tools and felt overwhelmed by them, maybe you should give Sculptris a go. At a slim 3.2 mb download it's smaller than an MP3 from iTunes. And you can't beat the price (there is a donation button on the site, though. For something so cool I just had to drop them a little cash).
Posted by Keith Lango at 1:01 AM 16 comments:

This isn't really a new item, but I stumbled across it going through Thad Komorowski's blog the other day. This is a transcript of an interview that John Canemaker had with Emery Hawkins back in the 1970's. Hawkins is an old time animator from back in the 'golden era'. I found his story resonated with me. He never did settle in and become known as a 'great' animator on the strength of his film animation at the big Disney studio, even though he worked there at different times. In fact he never settled down into much. By his own account he'd changed jobs 47 times in his career. He spent time doing all kinds of different types of animation. Mostly shorts and commercials. He never did work on a big feature film (until his work on the Raggedy Anne & Andy movie at R. Williams' studio at the time of the interview- and even that wasn't a smashing box office or critical success), but you don't get the sense that he felt like it diminished his career. He certainly didn't seem bitter about it. Seems he enjoyed his non-standard career rather much, actually. He spent a good number of years at Sutherland's studio doing corporate animation, and other years doing commercials. Basically he is the polar opposite of the 9 Old Men in nearly every way except in his skill. I definitely empathize with his wandering attention span. I too get bored really quickly if all I do is the same thing every day. And repeating a single style or formula of animation is also not something I find terribly interesting or fun. This quote pretty much sums up my feelings about my own career....

In fact the one thing I found that was more rewarding was working for a small insignificant studio because they just didn’t care what you did so you had an opportunity without it being cut out or altered because they had a rigid notion about something. You’d get that chance to do it.

I realized this about myself some years back and I came to see that I'd be a terrible fit at a big studio- so I stopped looking for work in one. Every now and then a person (often a student) asks me why I never worked at one of the big film studios. Like there's something wrong with me (some folks maintain it's because I'm a 'failure'. Whatever narrative works for your worldview is fine with me). But I know myself well enough to understand that it's just not my bag o' bagels, ya know? And if it's not mine, then there's a good chance that there are others out there who feel the same way. The animation biz doesn't do much to validate those outside the big film studio systems, which is kinda sad, but understandable on a base human level. It's for this reason that I find non-conformist stories like Hawkins' to be refreshing and even a little liberating.
Posted by Keith Lango at 12:21 AM 9 comments:

More than a few folks have asked recently, so I figured I'd indulge...

I've been at Valve and in the Seattle area for almost 8 months now. Life right now is glorious. The Good Lord has been very kind to me and has seen me through some pretty turbulent times over the last 10 years, but now I am blessed beyond my imagination in every area of my life. I didn't expect it, I don't deserve it, but I am thankful and I give Him the credit for it. :) Valve is a great place to work. My work is interesting every day and I enjoy the projects and the people I work with. It's challenging, fun and engaging. I'm surrounded by amazing talent and brains, people who impress, motivate and inspire me. The Pacific Northwest is flat out gorgeous country. The scenery when I drive to work is at times nothing short of breathtaking. The town we live in is great. We've found a really good church 4 blocks from our house. Our neighbors are darling people who are becoming good friends. The schools are really good and my family is happy. And again, it's not because I'm special or great or good. God is. It's all very humbling because I have some dear friends who are in some dark valleys now. I've been there and I know it may seem impossible to imagine it, but the sun does shine again. Just hang on, keep being faithful. And for those of you who don't like it when I express my faith, well... I dunno what to say. I am who I am, take me for what I am.
Posted by Keith Lango at 11:45 PM 62 comments:

I totally dig the yellow minions. There's some clever gags in here, but there is also the potential for some ham-fisted handling of "emotional" scenes. We'll see- the proof is in the execution....


One thing, though, the animation looks well executed. The animators look like they had fun. Certainly not shabby by any stretch.

Note: In some browsers the embedded video might not show up. Head here to this link for a look if it doesn't work for you on my site.
Posted by Keith Lango at 12:32 AM 5 comments:

I totally dig the yellow minions. There's some clever gags in here, but there is also the potential for some ham-fisted handling of "emotional" scenes. We'll see- the proof is in the execution....

One thing, though, the animation looks well executed. The animators look like they had fun. Certainly not shabby by any stretch.
Posted by Keith Lango at 12:29 AM 1 comment:

Looks like more and more of the videos I want to embed on my blog/site are wider than the 480 pixels this template is set up to handle. So it looks like my summer will be spent on a new theme that can accommodate the bigger videos the inter-tubes are serving up. Fun!
Posted by Keith Lango at 12:04 AM 4 comments:

Wow, this is just so gorgeous. The new Disney Tangled trailer is lush in its own way, but my heart really responds to this on a much deeper level. I hear Sony will have an end of 2010 US release for this. I'll be sure to catch it on the big screen...

A quick summary of the story proves intriguing as well...
Posted by Keith Lango at 12:01 AM 4 comments:

Stuff in the distance gets bigger, stuff closer up gets smaller. Trippy!

Email ThisBlogThis!Share to TwitterShare to FacebookShare to Pinterest
Labels: animation