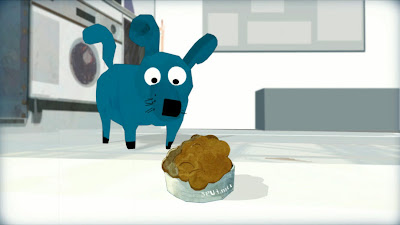 A former APT student of mine, Raoul Olou, - along with his friend Sigmund Payne - have recently posted their short film called Hell Kitchen online.
It's fun and I love the visual style of the short. It's a very clever use of CG. I love how europeans are able to think outside the hyper-realism box. Congrats go out to Raoul and Sigmund for a great job on a very cool little film
Posted by Keith Lango at 10:36 AM 6 comments:

What's up with the APT?

A few weeks back I mentioned that I would announce some news regarding future APT classes here. (What's an APT class? Read the FAQ for all the info). Since I like to try and keep my word, here's the scoop.

APT class #4 was a great success. It wrapped up in the middle of August. The students all enjoyed the course and they showed a lot of improvement. I'm going to put together a few examples of their stuff here this week or next. I think you'll really like what they did.

So what about the next APT class? Funny you ask. It's actually already begun. But wait? When did I announced it? Who's taking it? Well, I didn't announce it publicly. I reserved APT #5 for former APT students who wanted another session, as well as a few folks I know who had been wanting to take the course for a while but kept missing out. So APT5 is full, and like I said, it's already begun. Sorry about that.

So what about the class after that? Will there be another class after APT5? Yes, there will. But there's a catch-  just like APT5, APT6 is already full. What!?!?! Yup, so many former students got so much out of their previous time in the APT that they filled up two sessions to get even more. So APT6 is scheduled for the middle of November to just before Christmas, but it's full.

Basically, what I'm saying is that the APT is sold out for the remainder of 2008. Yeah, kinda stinks, huh?

OK. Now I know what some of you are thinking. "Hey, I wanted to take an APT class. How can I sign up if I don't even know a class is coming up?" It's a fair question.  But fear not, weary traveler! I have plans for more APT classes after these next two are out of the way. And that's why I'm here talking about it. :)

Yeah, I'm gonna have a list. See, in the past I would announce a registration date and it would be first come first served and anybody that missed out was just out of luck until the next announced class. But when APT4 sold out in under 25 minutes I realized that I need to create a waiting list for those who missed out. So that's what I'm going to do. Starting today- right now- I am taking names for APT7 and APT8. The names will go on a waiting list in the order they are received. Those first on the list will get first chance to take a spot for the class of their choice when the time comes for them to commit.

If you email me to get on the waiting list for APT7 or APT8 you won't be charged any money today. That will wait until we are much closer to the class dates. And no, there is no commitment by getting on the waiting list- but please only respond if you are serious about taking an APT class. I don't want the waiting list to be filled with a lot of names that will end up backing out later. But if you are serious about taking an APT class and if early 2009 fits your lifestyle then send me an email and get on the list!

Be sure to put "APT List" in the subject somewhere, and if you have a preference for APT7 or APT8 be sure to let me know. Once I get your name I'll add it to the list of those in line to take an APT class. My inbox is waiting and ready to recieve your reply. :)
Posted by Keith Lango at 1:00 PM 3 comments:

I've been a bit behind on this, but I did promise to get an update out regarding the APT. Keep your eyes on this space for more news soon.
Posted by Keith Lango at 12:41 PM No comments:

Here's something I thought would be neat to pass along. One of my APT students emailed me expressing their frustration with when and how and how much to push a pose. They were struggling with making pushed poses that didn't feel broken, or just 'off'. As a result they tended to be very cautious in their efforts to push things. Here's what I wrote to them. See if maybe it helps some of you guys out there...

When it comes to poses you must always have a strong sense of balance. Even pushed poses need to have balance and proper weight. For any pose held for more than 2 frames balance is absolutely critical. So when you push a pose, don't push it to the point that it becomes awkward or off balance. You can go from big pose to big pose, but the poses themselves need to be functional. Another note on a pushed pose- you can push it, but the pose needs to feel like it wouldn't be breaking bones, pulling muscles or dislocating joints inside the body. A cartoon character can have more elastic anatomy, but they still have an anatomy. The poses you choose should be true to that anatomy. More normally proportioned and human the character looks, the narrower the range of what 'pushed' can be before things feel broken. The more cartoon the design the greater the range of pushed before things break. Push the pose, but honor the anatomy. Look at this Bugs Bunny pose... 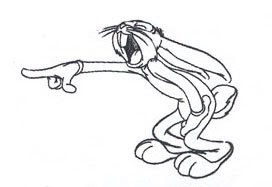 That's pushed for sure, but it still has balance and it still looks like he's not broken inside. Would you or I look like that if we did that 'pose'? No, but we're made of different anatomical stuff. You need to respect the anatomy, but still not be afraid to make things with more energy. Here's a page from an old Disney 'How To Animate' book that really illustrates the idea. 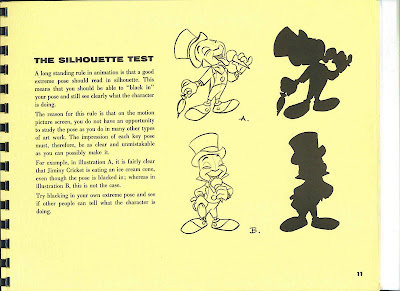 I have another bit on pushing timing, but I'll save that for later.
Posted by Keith Lango at 5:05 PM 2 comments:

I'm having more problems with my hosting service. At any rate, my email addresses connected with the keithlango.com domain have been down since last Thursday. They have been behaving very erratically for over a month now, actually. A permanent solution is currently being enacted, but I do not know when it will be finalized.

So if you've been trying to reach me since last Thursday Sept 11th, and you have not heard back from me (or you have gotten an email bounce notice) then please know that I'm not blowing you off. I just have not received anything for days at these following addresses..... 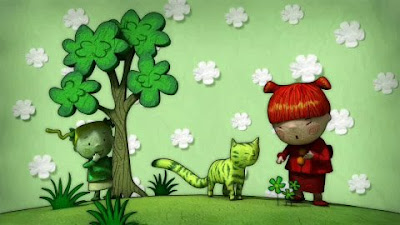 Here's a fun little something. A cute short film called L'amie de Zoe, directed by Matthieu Roussel. I really like the visual approach. Anytime people try to do something different with CG animation I feel happy. Take a moment and have a look.
click to watch the film.
Posted by Keith Lango at 1:46 AM 9 comments: