As we roll on toward the close of January 2006, I think it's safe to say that it will be remembered as one of the most pivotal and defining months in modern animated feature film history. But I think it's merely a continuation of events that occured way back in 1994. Let's review...

In the summer of 1994, feature film animation experienced a clear historical event with the release and subsequent monsterous success of The Lion King. The uber successful film set the expectations benchmark for all feature animated fare for the next 7 years. Everything was measured by how it ranked against TLK. The bar was set unreasonably high. Later that same year Jefferey Katzenberg left Disney with his nose permanently out of joint, which led to the eventual founding of Dreamworks SKG. Also in 1994 Disney released it's first DTV sequel adaptation of a recent feature film hit with Alladin2: Return of Jafar. The "Cheapquel" train left the station that year only to gain speed at an alarming rate. It's not a stretch to say that the landscape of feature animation was forever changed in 1994.

Shortly on the tails of 1994, the feature animaton biz experienced another bellweather. November of 1995 we saw the release and subsequent unexpected rave success of Toy Story. Made by some unknown little technology company named Pixar, the CGI animated film was born and a new era was ushered in.

By 2003 the consequences of the events of 1994/95 had reached a point of stasis. CG was king. Traditional feature animation had been bannished to the dungeons. The upheaval was monumental. Who knew in '94 that the perfect storm of coincidence would have born the fruit of misery in traditional feature animation that we have seen? Or that Cg would become the only form of animated feature film in the US? Oddly enough Hollywood still measures animated film success by comparing it's revenues to the wildly off the "bell curve" Lion King. Only now the idea is that only CG can hit those marks. Sooner or later the reality will settle in that you can't plan your entire business around a level of success that happens only once every 10 years. But that's material for another post, I think. :)

Now we sit in January 2006. First Hoodwinked carries forward the Alladin 2: Return of Jafar momentum, only this time in CG. It was only a matter of time before something like Hoodwinked - a very cheaply made film done overseas that does a respectable (and highly profitable) business with the animation buying public- was going to happen. Will Hoodwinked have the same downward pull on the CG feature market that Alladin 2 began in traditional? Time will tell, but the clock is running.

Then came the big news that Disney has bought Pixar. This is obviously a play out of the rest of the watershed events of 1994/95. I see Disney buying Pixar as the culmination of what was set in motion back then. What was that Lion King theme song again? Something about the circle of life? Indeed.
Posted by Keith Lango at 10:34 PM 7 comments: 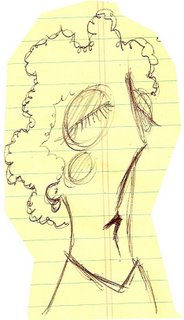 This one's a little rougher around the edges. It started from a random few lines that I scribbled during dailies. Suddenly this character seemed to jump ut at me from the lins, so I filled in the rest. This one would be fun to color up in Photoshop someday. Don't we all know somebody who looks like this?
Posted by Keith Lango at 8:27 AM 5 comments: 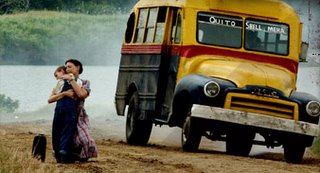 This wonderful, powerful, moving film debuted at #10 in the US box office this weekend. There's absolutely no mainstream buzz about this movie, but that's to be expected. It's the true story about christian missionaries and their greatest of sacrifices. The central theme is how the power of forgiveness can break timeless cycles of violence.

The opening monologue of the film says this.

It has been said that we cannot ever find true peace because we have never found a way to change the human heart. The events of this story challenge that.

Funny thing is I worked on some of the FX animation for this film last year and I didn't even know what it was. I was sitting in the theater thinking "Hey, I worked on that shot!". All I knew at the time was that we were working on some movie with a yellow plane and indians in the jungle. If I'd have known what it was about (or even how good it was going to turn to be) I would have been hyping this thing like crazy! Anyhow, skip Hoodwinked this week (please) and go see End of the Spear. You won't be sorry.
Posted by Keith Lango at 4:17 PM 9 comments: 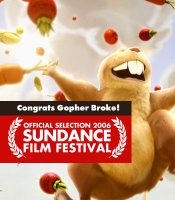 Blur's Academy Award nominated animated short film Gopher Broke is available for online viewing as a part of the Sundance festival.
I had the priviledge of helping Jeff Fowler get his story from idea to screen during the initial development of this film. After I left Blur for Texas Jeff took over as director and did a wonderful job making a really funny film. Go enjoy it!
-k
Posted by Keith Lango at 4:08 PM 1 comment:

Before Pictures for Patrick, there was.... 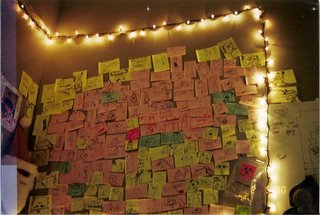 I've always loved Post-It-Note drawings. This is a snapshot of the wall over my desk when I worked at Big Idea. The arrayed collection of doodles was the product of three things.
Bryan and I would sometimes tear through a pad per meeting, often trying to get the other one to break out laughing in the middle of the meeting. That was the ultimate sign of success, to get people to look over the two of us wondering what the heck was so goshdarned funny. Good times. The doodles in this pic represent probably less than 25% of what we pumped out. This was the shrine to the boring meeting doodle. Bryan had a shrine to odd food called the Museum of Regretable Edibles. It had some real doozies. Tuna Jerky for you- and your pet! Cross species food items are always a winner in our book. I'm sure he has pics of it. Anyhow, to give a sense of scale, if I were sitting at my desk working (instead of taking this picture) my head would have barely broken the bottom of the frame. The pad doodle ran about 10 feet up the wall. It was a tall ceiling.
Anyhow, I thought some folks might get a kick out of this bit of nostalgia. And for more zany doodles of deceiving quality, check out Bryan's site. It's a treasure trove of ink that will move your inner chipmunk in ways you'd never imagined.
Posted by Keith Lango at 12:02 AM 6 comments: 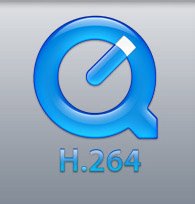 I got this cool tip from a VTS subscriber today. Check it out....

I'm still using Windows 98 but I've found that VLC media player can open
Quicktime 7 files on my operating system.
So if anyone has trouble opening the files due to an old OS just send
them over to http://www.videolan.org/vlc/ and hopefully that should sort
things out.

Thanks to Abe for that one. So all you old school OS users, you can use QT 7 files. And Quicktime 7 is really, really cool. H.264 codec. Mmmmmm. Tasty.
Posted by Keith Lango at 10:58 PM 2 comments: 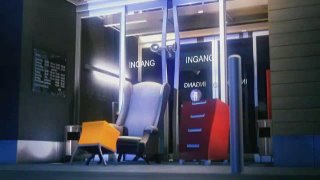 Brecht Debaene sent me a link to a commercial that he recently completed at his job. Brecht works as an animator/TD at commercial shop Hoaxland in Belgium. Take a moment to check it out- it's very fun and well done. It has a great cartoon energy to it.

The cool part is that Brecht's only 19 years old! This is his first job as an animator. If he's this solid at his first job... dang! Brecht has been a subscriber to my VTS ever since it started last March. Seeing him do well makes me smile. It's neat to see folks get their break.

Anyhow, congrats, Brecht! Here's to many years of happy animating in your future.
Posted by Keith Lango at 10:02 PM 5 comments:

I hope you have had a great holiday season and that you are all rested up!
I haven't talked too much about my Video Tutorial Service here on my blog lately. I didn't want to bog things down with overt commercial stuff. But this month it took me by surprise- we're all the way up to VTS11 in our ongoing series of animation training videos. Can you believe it? We're almost a full year into the VTS already!

So to celebrate the New Year, I decided to have special offer for the month of January for the VTS.

All new subscribers who sign up for the VTS before the end of January 31st, 2006- will receive two FREE back issue videos!
So if you subscribe to the VTS in January, I'll toss in the VTS01 and VTS02 videos for free!

Normally new subscribers would need to go and purchase these videos from the back issue store, but just cuz I'm in a festive mood, I'll spare ya the bother for these two. That's a $29.90 value for nuthin'!
To subscribe to the VTS, my monthly animation training video service, just click that fancy button to the left, the one below my happy character.

Wow, I sound like I should be selling K-Tel records on late night TV. Heh. OK, shameless commercial break is over. Thanks to all who have subscribed and to all who have expressed interest. May 2006 yield new treasures for all of us.
Posted by Keith Lango at 11:14 AM 2 comments: 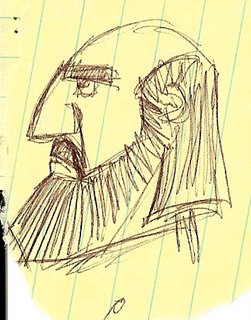