It feels good to move again.. 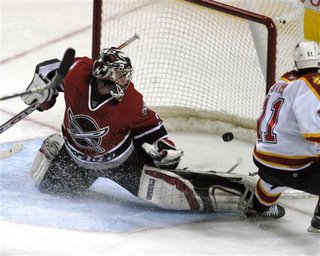 Thanks to the urgings of fellow DNA animator and Animation Mentor Scott Lemmer, I've been playing hockey again (I play goalie. Yes, I like to get in front of objects moving at high velocity). Scott has been bugging me to get back out on the ice again For a good while I begged off, being woefully out of shape and probably 20lbs too heavy. Thankfully I eventually gave in and went out for a little shoot around (thanks, Scott!).
So far it's just been a few weeks of pick up games at the rink, but I can feel my game coming back a bit. I played tonight and I didn't utterly stink. I only mostly stunk. Heh. The last time I had played was over 3 years ago back in Chicago. That was 4 studios ago! I stopped playing when I got a deep bone bruise on my elbow from a wicked slapshot that this Czech player unloaded on me. After 3 years off the ice I'm a bit rusty (to say the least!). And at age 37 I know my best years are well behind me. But it's been great to move around again. Animation is a bad career to be in if you're genetically inclined to wear some extra pounds like I am. So the exercise is great and it's good to be playing again. I know there are a lot of hockey playing animators out there. It'd be cool if we could all have a pick up game during Siggraph or something. You know up in Boston (where Siggraph is being held this year) there will be plenty of rinks to choose from.

ps: No, that's not a picture of me. It's just a pic of my hometown team's goalie and I thought it looked good. I don't have any pics of me in my goalie gear. Plus I couldn't stretch out like that without breaking something anyhow.
Posted by Keith Lango at 1:14 AM

I like the word verification at the bottom. Stops those "I am Andrea and I found your blog inquisitive and an excellent read, maybe read my blog some time" rubbish posts!

When your post said Feels good to move again, I thought you had changed jobs for the umpteenth time. Anyway, I will hopefully be making my way to Siggy but doubt I will be getting on the ice. South Africa is not renowned for having great Hockey teams. We play the field hockey version.

Ha I know how you feel a couple friends talked me into playing hockey after i hadnt been on the ice for 10 years. My legs were burning and wobbely and I kept saying why would you do this?

whoa keith.. i didnt know you were an upstate newyorker!

greetings from rochester!
i'm loving the VTS's.. they compliment my other schooling really well

i definitely know how you feel about getting back into hockey.. after a 6 year divorce from sports i finally got back into playing soccer (indoor of course..) and almost passed out in the middle of the first half... after 4 months i'm feeling much better and in the best shape i've been in a while.. keep it up man.. it'll get you moving around and activity like that always keeps me motivated to get back to work on my animation mentor projects..