Exploring the possible manifestations of an idea of mine is usually the most fun part of the process. I enjoy the journey of finding that one thing that just 'fits'.  Recently I've gotten a lot of very good feedback regarding my character Otto. For a character who's never done anything yet he really seems to hit a note with people. And when I made him I knew I'd found something. He just felt right. Any deeper analysis would be counter-productive. I'm just happy to have settled on it. It took me long enough. Making appealing characters is not easy. At least not for me it it isn't. It's hard work to hit that elusive, magical sweet-spot. Just look at various CG forums and see the character designs there and you'll see that for every one good one that had appeal, there are twenty (or more) that just somehow miss the mark-- either by a little or a lot. So for the sake of documentation (and to prove that I'm no master by any means), here is the checkered development history for Otto. 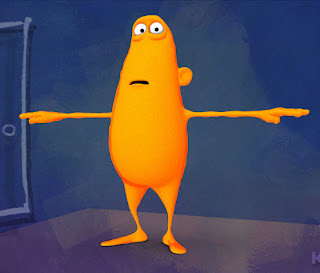 Ugly. His hands were too detailed (knobby knuckles) compared to the simplicity of the rest of the character. That 'visual harmony' thing at work again.  And the big space between his small eyes and smallish mouth just ruined the emotional flow of the character. Not appealing, really. So I simplified the hands, added a nose to try and fill in the space on his face and came up with this.... 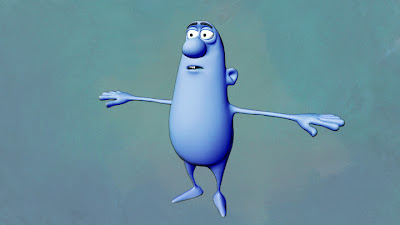 Better, but I still wasn't satisfied. Plus he had lots of rigging issues and skinning problems I didn't want to deal with ( I HATE skinning). So I scrapped him and decided that what I wanted to do was to try and recapture the soul of this guy... 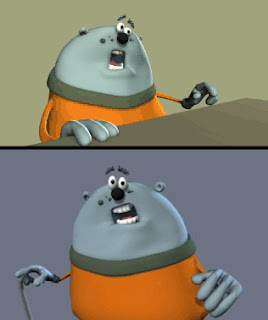 This was a character I'd made for some animation tests about 7 years ago. Unfortunately he was lost in a hard drive crash and so no version of this rig exists anymore. But I wanted to get back to that gummy, fun, round shape. So about 18 months ago that effort eventually became a character I call Garfo. 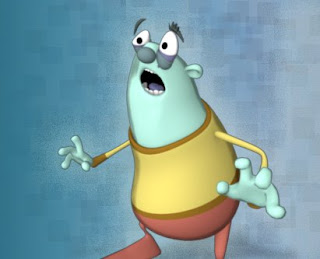 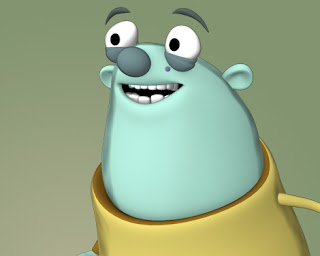 He's cool and all, but I never felt that I had found the right 'fit'- that sweet spot of appeal and fun. There was always just something about him that felt a little.. lesser. I did do some motion tests (which I will share in a little bit- maybe as soon as next week) and found he had some significant issues under the hood as far as his rigging went. So earlier this year while I had him on the operating table to solve some of those core rigging issues I figured why not see if I couldn't tweak him to be just a little more appealing, see if I couldn't get closer to what I really wanted. After a few hours of messing around that's when I finally hit upon this, Otto. 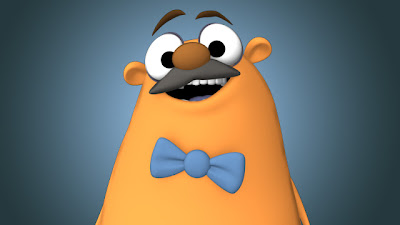 As soon as I got him I just smiled. He made me happy to look at him. I did try some additional tweaks, but they were gilding a lilly, so I just undid them and settled on him. But since I want him to live in painted worlds and not CG modeled ones (skinning is not the only CG task I hate. Modeling and texturing are on that list. And lighting is close to being on it). So I wanted to "back away" from some CG aspects of his appearance so that he could fit better in a world that was painted and not rendered. A little material and shader work netted this look, which I thought fit really well with the style of backgrounds that I want to employ going forward. 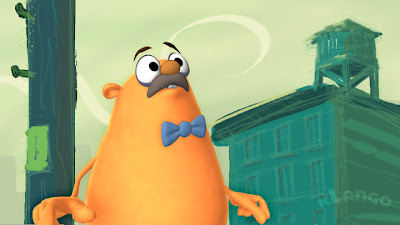 Finding this background style has been a multi-year story of its own. I'll share that here some day, too.
Posted by Keith Lango at 4:31 AM

This is sweet!! Thanks for sharing this, Keith! I also find it hard to design an appealing character but once you have it and when it brings a smile to your face, it is very rewarding. I actually like all previous versions of Otto even the very first one (least of all the second one). BTW, can you post a full-body render of him?

He is such a great character, and you are so right about his appeal! Thanks for this post. It is nice to see the progression in the search for appeal in a character. I am currently getting ready to finish up classes and hopefully wrapping up a short film shortly after graduation. I'd love to find a particular style for my film after I finish the animation and your work here is very inspirational. I love the background too. It reminds me of work from UPA, and I used to love their cartoons when I was a kid.
Thank you for your ongoing posts.

Hi Keith,
do you perhaps have any further comments on how you went about tweaking Garfo? How much of it was just trying stuff and going with gut feelings?

Btw is this Otto named after the mustachiod thug that Kevin Kline played in "A Fish Called Wanda"? :)

Hey Keith,
it's very inspiring. I love your character Otto and even have him as desktop background at work (the last weeks before I had Otto's facial tests, you've posted).

It's nice to hear that you also have old characters laying around (just like me and probably a lot of CG artists) and then you actually get back to the initial idea about them and finish/rework them into something awesome over a process of a few years. Thanks for sharing, it's a real motivating story. Looking forward to see Otto moving.

@Daniel:
Yeah, mostly tweaking proportions and positions of various body bits and stuff. It's totally a gut feel for me. I don't know many formulas for appeal (I'll leave the more scientific approach to others who have studied things more than I have). And while I did enjoy the A Fish Called Wanda, it had no bearing on the name or the mustache. I'd never made the connection til you mention it.

@andyoko:
I'll get some body poses together this weekend and post them.

Looks very nice. I really wish you'd post something about how you paint the backgrounds like that. I'm sure you'd like to keep it under your hat though ;)

Thanks again for the kind remarks about my film!

Hi Keith. I love where Otto ended up, very charming design. ...though I dare say Garfo is pretty darn appealing too. Thanks for sharing. Count me among those looking forward to the motion tests!

@Ben:
Yeah, I still like Garfo and I'll definitely use him as a second character when I need one. I did eventually fix his rigging problems and he's a little friendlier to animate.

@Graham:
Not much of a secret about the backgrounds, really. Just a lot of practice using Painter. My earlier efforts at painting backgrounds were just terrible, so it was just a lot of study and learning from others, emulating successful things I saw and just trying to get to the point where I got something that worked. The hardest part for me to get a feel for was how to combine detail and broad brush to get something that fit instead of something that looked ham-fisted.
The cool thing is if I need to I can cut the painting up and use camera projections to put the paintings on cards in a CG set if I need more control over the Z space with the camera, though stylistically I want to keep that to a minimum.

Excellent insight to the thought process and development of your characters.

I just want to echo everyone else and say thanks for sharing, I find this kind of thing very motivating!

I'm also loving the expressions you get through these characters, can't wait to see more!

Nice work, Keith. Otto is fun to look at. I see a little bit of Ballinger influence in your designs.

Definitely the most appealing, loving the shot with the background.

Otto's poofy nose and otter-like head shape make him look a bit like an animal of some sort. His mustache has a sesame street vibe and his eyebrows remind me of Veggie Tales, or even Calvin and Hobbes.

The last three iterations made me grin. I'm definitely a fan of Garfo's second expression (though, for me, it's his body color that isn't hitting the spot) and of Otto's expression. They make me grin. Big.

Lovin' this guy. Reminds me of our old post-it note wars. He's got that Klango goofy chutzpah. No doubt.

Great stuff Keith. I've got two characters for a film in progress and I find I am always tweaking them to make them more appealing. It's frustrating at times since I'm using blend shapes on them; which means all the blends need to be changed. Any thoughts? have you dealt with issues like that or are you using another facial control that's more forgiving? Very cute character BTW

Thanks, MikeB. I'm using a lot of different deformation/control methods for his face, which actually makes things pretty complicated to update. Some blendShapes, some clusters, some softMods, some joints, a wrap deformer or two. Lots of things to get what I want. I'm seriously considering ripping a lot of that out and simplifying his face control system more. I'm still not getting the shape control I want even with all those combined deformation systems.

He looks really nice and 'I want to discover somthing really cool in the world'-like.
He fits good in that painted realm.
Good luck with the futher development of him and his world.