I just got back from seeing the Corpse Bride. I admit, I'm a huge sucker for stop-mo animation. Ever since I was a wee nip of a lad I've been captivated by the wonder of bringing a very real object to life. Drawings are ethereal, they capture an idea. CG is a mathematical construct inside a world of silicon. But stop-motion is the one animation medium that actually uses real things. Things you can pick up, hold, turn around, move, look at- play with. There's something magical about that and I hope the art form never becomes so specialized that we lose out on seeing wonderful stop-motion animation on the big screen.

Overall as a film the Corpse Bride was good fun. It took a bit to get rolling and at times in the beginning it felt like it was trying a bit too hard to be the second coming of The Nightmare Before Christmas. Once they settled down and got that out of their system, though, the film really started to take off. The second act is where many animated films shipwreck themselves. *cough* Robots*cough*. But the CB had one of the best second acts in an animated film that I've seen in a long while. It just keeps drawing you in, and you wonder how in the world this thing is going to resolve itself. By the time we hit the relatively brief third act you're in for good. There were some truly wonderfully animated performances. The old skeleton elder's performances were just flat out amazing. Not in terms of technical or flaboyant showmanship, but in terms of bringing such warmth and life out of such a simplistic design. With a kind of restrained simple elegance the animators managed to capture such fantastic gestures, movements and expressions with that character. Good grief they managed to get clear, precise and subtle expressions out of a puppet whose only moveable part in the face was his jaw!!!!

Check out this image of the puppet (from a G4 TV interview with the co-director). 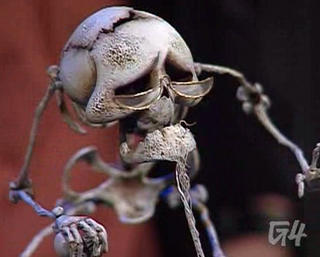 The simplest puppet in the film had some of the most exquisite acting. I was just blown away with how much they could get a unique character across with such a limited puppet. On twos. With no undo button. Huge kudos to the crew that worked on that character. You are my new heros, I am not worthy.... Much of the hype has been on the technology in the faces of the hero puppets Victor and such (and that stuff is groovy cool, no doubt) but I was enthralled with the performances from the simplest puppets. There we see the power of what great animation can accomplish, the power to give life to something so seemingly incapable of it. Makes me want to go and simplify everything I'm working on just to boil it all down to that core element of great performance.

So yeah, definitely go see the Corpse Bride. It's not a perfect film, but it's a fun ride and certainly well worth the time. And if you're able you simply owe it to yourself to see in in DLP. Mmmm. DLP.
Posted by Keith Lango at 12:41 AM

Keep it up and you'll end up in a DLP support group Keith.
"My name is Keith Lango and it has been 8 days since I have seen a movie through DLP" :)

Really love what you are saying about simplifying performances. We are in our 3rd quarter at Animation Mentor covering Acting 101. The character has very limited facial controls, what Bobby keeps calling puppet mouth. At first we all wanted full facial controls but the we started to realize that keeping it simple is an asset and not a roadblock. It forces us to boil the performances down to the purest essence. Clarity is key, now to see if we pull it off.

i saw cb last tuesday before it was released and my jaw dropped in the first five minutes. i feel like i've seen it all in the computer. there are always better performances to watch, but as far as effects... seen it. the beauty, simplicity and the execution of this film was absolutely what i want to feel when i go see a film. it took you to another place entirely and the performances were wonderful.

it was definitely a timely film for me because of the same reason you (brian and keith) mentioned: simplifying for clarity. i've got a lot of footage to get thru and being clear is the only way it's going to happen.
-d

Talking about StopMotion films. ¿What do you think about the new Wallace and Gromit movie or what do you expect from?.

Saw it...loved it....will see again. Story wasn't my fav from burton but I still enjoyed it. Characters were great and the animation was outstanding. Two keys up:)

Can't wait to see Corpse Bride. I worked on Wallace and Gromit in Bristol and we were always aware of our partners in Stopmotion working on Corpse in London. It's so timely that the two films are coming out at the same time- Although they are healthy competition, they are also partners in the craft, and man, the CG world needs a bit more simplicity and craft. We were encouraged to make our animation simple and strong- and at Aardman especially, not to hide the handmade essence- You'll see what I mean when you see all the fingerprints. Hope North America takes to it! I'm wrestling with a computer now...help!

Just saw CB and loved it. I was blown away by how clean and non stop-motiony everything looked.

But honestly, I thought they could have pushed the facial just a bit more. None of the puppets had a definitive "ooo" or "mmm" shape, and the living (non-dead) characters could only open their mouth a little bit. Made the lip synch look a bit er....dead. Stupid puns.

But who am I to criticize. Anyway, overall I loved the film and I hope to see more form the Burton camp.

Don't be too inclusive saying that most animated films get shipwrecked with the 2nd act. Most disappointing films (animated or not) have trouble navigating the act 2, it's a coral reef just waiting! As you and I both know, the second act is the hardest one to write... except for maybe the 1st and 3rd acts.

Can't wait to read your thoughts (and everybody's comments) on Wallace and Grommit!

Does anyone really care what you have to say. Well...yes, I do. I enjoyed my brief visit. If you have an interest in champ forklift part you might be interested in paying a visit to my champ forklift partsite. In the meantime, keep up the good blogging.