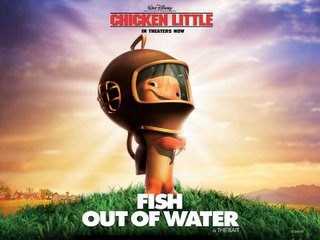 It's really funny to see Hollywood implode on itself. They play so many games trying to guess their way around what people will or won't like it's a wonder they're able to decide what to eat for breakfast each morning. To read some internet sites you'd get the impression that every Disney executive was having a hyperventilation fit earlier this week. Add in some bad reviews from snarky Hollywood movie critics about their latest film Chicken Little and there's apparently a mad scramble to duck for cover.

Well, seems a lot of their worries were about nothing. Chicken Little is doing a healthy opening weekend business. Families are responding well to the little movie. I have to say I'm one of them. It's a fun flick. Not overly deep, but it has some heart, it's entertaining, it's funny. It's got some very fun characters and memorable moments. Is it a perfect film? There is no such beast if you ask me. It's a solid film that earns your smiles and attention. All that Pixar/Disney/2d/3d political crap aside, I'm glad the film is doing well so far. Good job to you folks at WDFA.

And on an animation front I have to say that I'm really jealous of those animators. Cartoons! Yay! I love cartoon animation. It's such a fun and freeing way to make things come alive. Seeing all those older 2d techniques brought to bear in Cg makes me very happy for the future of the medium. And the acting on Buck Cluck! Wow. The dad in CL had some of the absolute best acting I've ever seen in animation, 2d, 3d or 99758D. If for nothing else go watch CL and study how they handled the dad character in those quieter moments. His best performances came when he wasn't saying anything. Kudos to the director for letting the character and those moments breathe. Sometimes you can cut a movie too tight and not give the characters room to breathe. It's these moments of silence that let the animator really dig deep to find some great acting performances.
Posted by Keith Lango at 10:37 PM

I believe the animation sup. for Buck Cluck is our friend Clay over at the Animation Podcast, he did a terrific job for sure. www.animationpodcast.com if anyone hasn't listened to them you must start!

That's good to hear Keith, I was really hoping it would be a good film (and not for political reasons).
For some reason those of us in Australia have to wait until the 1st January to see it :-(

I think I remember Clay mentioning he was on the Buck Cluck team where long-time 2D vet, Nik Raineri was supervising.

thanx a lot for your help on the last post.

Yep, Nik supervised and set the standard for Buck. He's one guy who never compromised his own quality. I just tried to keep up. What an amazing learning experience.

I really enojoyed the flic, story seemed a bit rushed but man oh man the animation on Buck was amazing!

I agree that the animation on Buck
was great. All the animation was super. I liked the movie. Saw it in 3D with the glasses. My 3 yr old seriously loved it. The audience we saw it with seemed to be really into it too.