Another year of very pretty short films from the talented Fenchmen.

I liked Apres le Pluie. I don't get it, but I liked it. It has a nice mystical quality to it. No, it's not Miyazaki good, but you can certainly taste the influence. 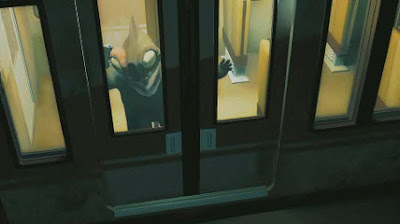 To me the most intriguing was Underground Psycho. It's a really striking piece visually, and the story, while strange, was really compelling. I love the circular nature of the narrative. That's a difficult story telling style to pull off well and they handle it nicely. The animation is excellent - fantastic, really- even though it's not Hollywood CG feature film polished. I love how the characters all are alive and show some measure of thought and motivation beyond the surface. It's mostly CG, but the artists don't fall for the same old visual trap in CG, nor do they fall for the 'Gobelins pastel style' of CG. For that you can watch California Love, highlighted on Cartoon Brew).

Speaking of California Love, I thought it was the least interesting of all the student pieces. It felt like they were trying to just ride the coattails of previous attention getting Gobelins shorts. And I suppose getting a mention on the Brew means they succeeded. But to me it's just a repeat on the same old visual meme: the crazy chase through a handsomely painted CG world. Le Building from 2005 kinda had some flavor of that and it was fun and fresh. Then Burning Safari from 2006 took it to the next level and that was really fun to watch. Then there was the Annecy 2007 opening film- where the Raggedy Andy looking dude whips through the world so fast that everything loses structure at times. That was the best of the lot, I think. The chase idea had been maxed. Last year's Oktapodi was another take on this idea and while not as hectic a chase, the addition of the love story made it worthwhile. California Love just seems like another Gobelins run on the concept. OK, we get it. Crazy high speed chases through painterly worlds are cool. We can put that one down now. Let's allow that ground to lie fallow for the next few years.

The other ones are cool in their own way, too. Check 'em out. It's always fun to see the new stuff each year.
Posted by Keith Lango at 2:28 PM

Perhaps the "chase scene" is a requirement for an assignment, if they even have those (the only thing I know is tight is the enrollment and obviously the critiqing)...

"Underground Psycho" creeped me out. The part I really liked was the hand-drawn part near the end. Reminded me of all the nightmarish stuff in "The Wall".

Not to be a spoil sport, but all those chase scenes are kinda a rip off of a movie called Mind Game. THose of you who've seen it will know what I'm talking about.

Not to discredit the work, cause it's amazing. It just seems that every year they lift from the movie in a different way.

actually, Apres le Pluie's art direction reminds me of Tekkonkinkrit, have you guys seen that movie? it also has the wonderful Plaid as the score musicians