Over the Hedge trailer

My initial reaction? Ehh. Mixed. I'll see it when it comes out. I like the comic. :) Animation wise, the stuff seems pretty nice overall. Hard to tell from the trailer shots because they're cut together a bit slapdash (why do American movie trailers for animated films almost universally STINK!? Why can't we make good trailers that tell us about the story the characters, the relationships a bit? Maybe a bit more like Japanese trailers, but without all the plot giveaways.)

The heads in OTH seemed a weeeeeee bit squishy in spots. A little distracting. Shading looked nice. Voice work seemed pretty blah. Not much energy in those voices. Bruce Willis? Unmemorable. Gary Shandling? His voice bores me in human form. Shatner as a 'possum should be fun, though. Bill's usually good for a chuckle here and there. Character design lost something along the way from the original comic strip. Here's a comparison... 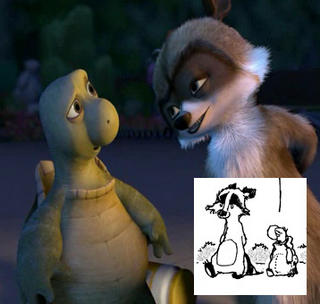 Would have been nice to see them keep RJ's (racoon) big nose and frumpy proportions. The fur feels a bit too clean as well. Of course I know that you have to do things with original inspirational designs to make them hold up for animation, but it seems that aside from a few exceptions most CG interpretations of character designs end up feeling a bit blah. Like all the interesting edges have been sanded down to a smooth, dull form. Clean, pretty. This is an annoyance I have with CG lately. A bit oversmooth, a bit too clean. We need to find ways to tussle up the designs a bit, and I don't mean just with texture maps. I guess that's why a film like Wallace & Grommit will always seem so charming. You can feel the artist's touch in every frame. And yeah, there's artistry in this Cg, lots of it. But it feels a bit cold, distant. I think maybe we're stuck in a bit of a rut in CG. I thought Madagascar did a great job of adapting some cool designs and maintaining their shape and form integrity into the CG medium. Would be neat to see us CG filmmakers get a bit more adventuresome with this stuff. And I include myself in this. No knock on the great talents over at DW working on this. It's good stuff, but it's not quite grabbing me by the shirt collar and getting my attention as much as I wanted it to. We'll see how it goes when the movie comes out. I'll be there to watch. :)
Posted by Keith Lango at 10:54 PM

You are so right about the trailer comments. It's always the same formula and I'm so tired of it.

I remember the first Wallace and Grommit trailer (teaser), cracked me up. Then I saw a "Dreamworks" trailer version of it, and it was formulaic and sucked big time.

The power of trailers... Hope everybody saw the "Shining" V2 trailer. Great spoof!

just thought this was interesting www.unitedmedia.com/comics/hedge/ not to rain on the parade, but....

OTH will definately be the warmest film DW has done so far. There are also a couple other interesting characters not shown in the teaser, which will be revealed in some additional upcoming trailers.

I think that the problem with the character animation (as seen in this trailer) is that the skulls feel too squishy--they're deforming left and right. These animators (or riggers, rather) need to figure out how to raise a character's eyebrows in a lively enough way so that they don't feel compelled to stretch the freakin' head upward. It looks like cut-scene footage in between a 1998 Playstation game.